What I have learned during the pandemic - Part 2

This is the second of two posts on what I learned during the pandemic.  You can read about the first five in Part 1 of this blog post.

6. Racism continues to be a central issue for America

In 1903 W. E. B. DuBois wrote in The Souls of Black Folk, “The problem of the twentieth century is the problem of the color-line.”  COVID-19 and the murder of George Floyd in Minneapolis remind all of us that this statement is also true of 21st Century America.  The infection and death rates of Covid-19 are disproportionally high for black and brown communities.  This is not because of any inherent characteristics of these communities and people but because of the disproportionate rate of poverty of these groups.  The pandemic has brought into shocking visibility the lethal combination of racism and poverty in this country.  In biology a specimen is often stained with dye so the structure and features show up more clearly under a microscope.  The pandemic has been such a dye for the social, economic and health disparities in our country.

The murder of George Floyd at the hands of a police officer was captured in a chilling video.  It has left indelible impressions in our minds and hearts.  We white people can see unmistakably what our fellow black and brown citizens have been telling us for decades, even centuries.  We now can understand that all those previous instances of black people dying at the hands of police were not exaggerations.  In fact, all those separate incidents are not separate at all but expressions of systemic issues with our policing agencies reflecting the systemic issues in our communities.  This time, perhaps, enough is enough. 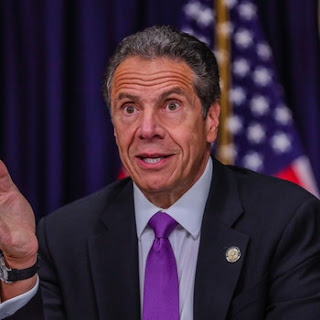 I have developed a new appreciation for the leadership at state and local levels.  Given the disarray at the federal level, I along with most others have turned to our local and state leaders for information and guidance as we live during this pandemic.  I am fortunate to live in New York where Governor Cuomo has risen to the occasion.  His daily news briefings have been consistent, coherent, and based on information.  He has also been more self-disclosive than I have ever experienced him.  His reflections on his family and his personal feelings have helped me connect with him as a person not just as a political official.  This has been repeated in many other states as governors have stepped into the leadership void.  I have also experienced this at the local county level.  Governors and county executives care about us in ways that the national leadership does not appear to.

8. Solitude is not all bad.

It turns out that I have never been a big fan of constant social interaction.  My professional life was spent interacting with people constantly.  However, my leisure activities were all solitary:  photography (capturing, developing and printing images), reading, writing, hiking, walking/running, and web site development.  With the pandemic, I have more time to do these very things and do not miss social interaction as much as others.

9. I have upped my cooking game with Ninja Foodi Deluxe


Typically, I cook dinner.  I got into that habit when I had retired, and Marilyn was still working.  It was a way of lightening her load a bit but also allowed me to set the time for dinner rather than have it vary depending on Marilyn.  I like to eat between 6 and 6:30 and cooking, which I like, was not any price at all to pay to ensure that.  Once Marilyn retired, she began to do some more cooking but I probably did more than she did.  My meals have been pretty basic and prepared quickly.  With the Ninja Foodi Deluxe, I have been doing more complicated recipes that often include sauces.  So far I have done the following:  several salmon dinners with tasty sauces, braised short ribs, jambalaya, pineapple upside-down cake, berry upside-down cake, seared scallops and pearled couscous, chicken and fried rice,  chicken and dirty rice and more.  So far I am having a lot of fun and Marilyn is enjoying the food.  Come to think of it, this reminds me of a certain fence getting whitewashed in Hannibal Missouri.

10. My sleep has improved

In some ways, this has been the most surprising.  Ove a year ago I decided to focus on getting at least seven and a half hours of sleep a night. That means that I would need to be in bed for at least eight and a half hours since I typically am awake about an hour a night, according to Fitbit.  The key is going to bed at the same time every night and getting up at the same time.  Before the pandemic, that would work for most nights but if we went out for the evening, I was rarely able to get back home in time to hit my target of between nine and nine-thirty.  Now I can because we are not going out.  If I go to bed between nine and nine-thirty and get up around six, I can routinely get my goal.  In addition, the Fitbit gives me all sorts of information on the quality of that sleep.  This encourages me to stick to my routine so I get a “good grade” in the morning when I sync with the app. 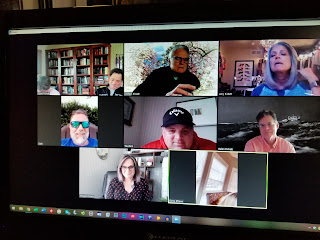 I have joined most Americans and have spent a lot of time on Zoom.  It was novel at first but now has settled into a routine.  I have regularly scheduled zoom calls with friends, my siblings, and my children.  The pandemic has meant that the interaction has increased with my siblings and children.  Plus interacting with both as groups has added an element that would otherwise never be the case.  The conversations cover all sorts of topics.  There is natural storytelling and reminiscing about our times together.  But we also talk about current issues.  It is a constant pleasure for me to listen to my children expressing their views about what is going on in their worlds.  Each of the seven is a fully developed individual with their own ideas, experiences and families.  They don't necessarily agree on issues but they express affection and respect for their brothers and sisters.

I have learned or come to an awareness of many other things as well but these are the ones that are the most significant.