What I have learned during the pandemic - Part 1

In the over three months that I have restricted my life because of the pandemic, I have learned a lot about myself and others.  Here are the first five things I learned.  There are another six in Part 2 of this blog.

1. The clown car national administration is incapable of keeping us safe. 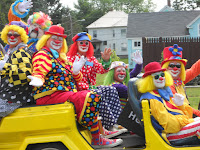 This was not that much of a surprise, but still.  Specifically I mean the top political leadership.  This ramshackle collection of politically correct top leadership is supported by a honeycomb of acting deputies.  None of these are particularly adept at their jobs but they understand their audience and their clientele.  And it’s not us!  They are in their jobs because they tell Trump what he wants to hear.  Ideologically most of them are hell-bent on reducing or destroying the civilian agencies they lead.  Of course, it made no sense to them to continue the work of the National Security Council Directorate for Global Health Security and Biodefense.  This office was established after the Ebola epidemic of 2014 to marshal the resources of the federal government to be ready for the next epidemic or pandemic.  It was as if the captain of the Titanic was hobnobbing with wealthy passengers with no one on the bridge.  “We haven’t hit an iceberg yet and besides this ship is unsinkable.”

When we did hit the inevitable iceberg, no one was in charge.  Valuable time was lost while rookies tried to understand what was going on.  They were getting briefed by “experts”—the very people they had spent three years belittling and undercutting.  Once they understood the danger, they lost even more time trying to convince the captain to leave the lights and adulation of the ballroom and focus on a clear and present danger.  Once he began to grasp what had happened and what was about to happen, he began to make sure that no one blamed him.  Famously, he finally said that “I am not responsible for anything.”  Stirring words as we began to sink into the frigid North Atlantic.  If he had been the captain of the Titanic, we all know that he would not have gone down with his ship but would have found a way to bully his way into a lifeboat and leave most of us behind.
It is sad that we have a president who is incapable of leadership, especially sad when we need leadership desperately.  More about that later.

I have learned a lot about epidemiology.  Here is a list of the terms I now know but of which I had been unaware two months ago.

3. Being outdoors is better no matter the weather.


The birds are here but where are the people? #socialdistancing #rochesterspriny
A post shared by Bill Pickett (@pickett.bill) on Mar 23, 2020 at 10:36am PDT

In the early 1970s,  I began regular aerobic exercises.  The exact exercise has varied:  running, rope jumping and race walking.  More recently I have been walking four miles a day in an average week at a rapid but not racewalking pace.  During pleasant weather, I would walk outside, sometimes substituting hiking or biking for walking.  If the weather was inclement, I would walk indoors at our local recreation center, YMCA or mall.  The definition of inclement was beginning to expand to include light rain or even coolish weather.  Once the pandemic hit us, the rec center and the YMCA closed and I ventured outside to walk on days when I would normally go inside.  Guess what?  I found that being outdoors was great even if it seemed a little cool even cold or was raining a bit.  There was something about being in the fresh air especially feeling a breeze that really turns on my endorphins.  Now as the Y and the rec center are beginning to open, I find them much less appealing.  Whenever possible I try to do my walking outside as long as the footing is safe.

4. Exercise bands are not as good as machines at the YMCA.

Weight lifting was the other part of my regular workouts.  Nothing extreme but just enough to keep what muscles I had functioning.  Our YMCA has a full set of E-Gym equipment and I quickly became addicted to them.  I made sure that I worked out on the machines three times a week.  Their technology ensures I am doing the exercise correctly and gradually increases the weight as I get stronger.  The real kicker was an estimate of my biological age based on muscle strength.  I was able to get mine down to 50!  You can see why I was addicted.  That is all in the past and  I probably won’t be using them for some months more.  Two months into the shutdown, I bought a set of exercise bands and began to use them but it as just not the same.  I keep asking them what my biological age is but get no response.  Without that kind of re-enforcement, I just can’t tolerate the boredom of using them.

5. There is even more to watch on TV than I thought.

Other than the occasional national network news, we haven’t watched network television for months.  Before we left for Florida, I got a great deal from Spectrum and we decided to try cable again.  We added HBO Go to our other services:  Amazon Prime, Hulu and Netflix.  We can also stream PBS shows.  We were avid moviegoers and will be again but television and streaming are more than enough for us right now.  We are using a Roku so no wires.  Here are some of the shows we have been watching, both series and movies:

I learned a lot more during the pandemic and you can read about those in Part 2 of this blog.
Posted by Bill Pickett at 9:44 AM