The tragedy of the homicide of George Floyd has triggered demonstrations throughout the United States and indeed the world.  There have been similar moments during my 80 years of life but somehow this time it feels different.  We may be witnessing the beginning of a significant change in American life.  I hope so.  I think most Americans feel that enough is enough and now is the time to begin to make changes.  Not just in policing but in other areas as well.  Today I heard Governor Cuomo say essentially that.  This is the time to "carpe momentum," to seize the moment. 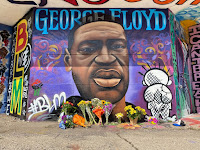 Marilyn and I spent the weekend working out our feelings and ideas about this moment.  We did not feel comfortable going to any demonstration so we decided to express our view directly to our elected officials on the town, county, state and federal levels.  We did not waste paper or postage sending anything to the President which is sad but realistic.  Here is that letter.


As an about to be 80-year-old male and 69-year-old female, we have not been participating in the demonstrations occasioned by the murder of George Floyd in Minneapolis.  However, we do not want our absence from these demonstrations to silence our voices.  And so we write to you as one of our elected officials to ask you, what actions are you going to take to address four issues:  police violence, guns, racism and economic inequality?

The video of an officer sworn to protect and serve almost casually killing a citizen who posed no threat to himself, the officer or bystanders lives vividly and disturbingly in our memories.  When the EMT crew arrived, they dragged Floyd’s lifeless body as though he was roadkill.  They acted with the assurance and arrogance of impunity.  Because of a 17-year-old girl and her cell phone, the entire world has been able to witness this tragic interaction between police and citizen in a country which most of the world sees as a beacon of liberty.  We were horrified at what we saw, not because it has not happened before but because this time it was blatant, out in the open, and undeniable.  We do not want this done in our name, not ever.

We also know that this has happened too often in the past several years to view it as an isolated incident; there is a systemic problem that goes well beyond individual police officers.  We want to believe that most police officers would condemn this and other instances of excessive force but this abuse of power may be more common than we know.  Unfortunately, the lack of comprehensive and transparent information on police use of force makes it difficult to know for sure.  We do know that as the interaction between militarized police and demonstrators increased, the acts of violence also increased and have made things worse, not better.

We believe this is not just about individual police officers who have acted illegally.  We ask those sworn to serve and protect us to do so in a society awash with guns of all kinds so that even a simple traffic stop can erupt into deadly gun fire.  We ask them to serve in a society with endemic racism which has become more visible in the last three years.  We ask them to protect us in a society riven by polarizing political differences which our political leaders have exacerbated rather than diminished.  We ask them to provide public safety in a society in which social and economic inequality has increased and predictably resulted in social and health disfunctions.  Beyond the need for justice in the Floyd case, we must begin to deal with these systemic problems

The fact that George Floyd was a black man has underscored the racial issues involved in policing.  As a white couple, we have never experienced what it is like to view police as dangerous protagonists.  However, we have no doubt that what our few black friends say about their experience is valid and true.   We have never had to have “the talk” with our children but if we or they were black, it would be irresponsible not to.  This is a deeply sad situation.

Police violence, gun ownership and control, racism and economic inequality are the foremost issues confronting our community.  Our national administration is incapable of providing any leadership—let alone “mature” leadership as General Mattis termed it.  As with the coronavirus, it is up to others to step forward and provide that leadership.

I ask that you publicly acknowledge these issues and describe the actions you will take to begin to address them.  Please do not suggest that we need to study these issues before we begin to change things.  There have been more than enough commissions and reports on these topics.  Recommendations have been made but rarely has there been the follow through required to change cultures and outcomes.  We ask you along with other elected officials to commit to concrete steps to begin the address these core issues.

Governor Walz of Minnesota said, “I don’t think we get another chance to fix this.  I really don’t.”  This time must be the last time and you must step forward to provide the leadership we all need.  You will have our support in whatever way we can as you do this.

There are already initiatives underway in New York with state legislation to address some of the policing issues but more needs to be done in other areas.  The governor has publicly spoken of these issues and we look forward to actions to match his words.  At the federal level, Congressional Democrats have introduced legislation that will address some of the policing issues.  But again, much more remains to be addressed.  And simply introducing legislation, while a good step, does not change anything.  We intend to keep ourselves informed about these developments and to communicate our thoughts directly to our representatives.  Little or nothing has been done at the local level to recognize these issues and to respond with actions.  Again we will keep ourselves informed.

I encourage you to examine your own views on these issues of police violence, guns, racism and inequality.  I also encourage you to write those ideas down so you can communicate them to others.  To do that, however, you will need to do more than Tweets or Facebook posts.  It takes time and thought to work out your thoughts in a longer form but the exercise can help you think more clearly about what you really want to say.  I encourage you not to get caught in the trap of responding to others.  Focus on how you really feel and think about these issues.  It will be a rewarding process even if you never share the results.  But finally I encourage you to do exactly that.
Posted by Bill Pickett at 12:17 PM