I think I've fallen into a triangle! Part 1 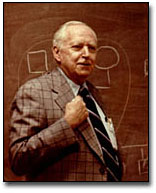 I am certainly no expert in Bowen's theory although I have personally benefitted from his insights.  I have used them to understand better my own and others' behavior in my families.  I have also experienced how they can clarify interrelationships and resulting behavior in other human groups.  Perhaps, even an entire society.  With apologies to the late Dr. Bowen and his many highly trained followers, I want to use my version of one of his basic ideas to look at my own behavior.


Bowen taught that two-person relationships, or dyads, are inherently unstable.  They have a low tolerance for tension and quickly turn to third parties.  A triangle with a third person can stabilize a two-person relationship experiencing tension.  For example, a mother and a teenage daughter are experiencing tension in their relationship.  The mother reaches out to a friend to talk about her daughter and the behavior that is creating the tension.  The friend can play a vital and useful role in helping to stabilize the mother-daughter relationship.  If the friend listens sympathetically and suggests strategies to help the mother and daughter communicate directly, the third person can help reduce tension and reestablish a livable balance.  We can probably all recall times when we reached out to a third person this way.  Perhaps we have been a third person for a dyad.

But triangles don't always turn out that way.  Sometimes triangulating a third person accentuates problems in the relations making it harder for the dyad to grapple directly with problems and feelings.  This can be especially toxic, I believe, if the third person is also experiencing tension in other relationships.  Let's adjust the genders in the example.   A father experiences tension  with his teenage son.  He reaches out to a female friend who it happens is also experiencing stress in her marital relationship.  It is deceptively easy for the two people to calm their tension and anxiety by bonding together through sharing information and criticism of the other person in the relation.  The friend deepens her relationship with the father by listening to criticism of the son.  She agrees with it and even stimulates it.  She never says or does anything that would help the father deal directly with the son.  She may even begin to share about her marital relationship.  Over time, the two may grow more emotionally enmeshed and thus more distant from the son and the husband, as well as the father's wife.  They have calmed their anxiety but have done nothing to address underlying issues.  The situation has become worse by inserting a third person into two family dyads and creating two new outsiders, the mother and the son.  They may, in turn, triangulate in retribution.  (By the way, I could change the genders in the examples and the result would stay the same.  These are human dynamics.)

There are also predators who cruise around the social landscape probing relationships to see if one or both members of a dyad are experiencing tension.  This creates an opening for a third party whose motivation is typically not benign.  This is especially disastrous in marital relationships.  An outsider senses a vulnerability in a couple of which even they may be unaware.  The predator typically focuses on the dyad member of the opposite sex and begins to ingratiate him or herself into the relationship as a friend of both.  Under the cover of friendship, the predator cultivates emotional closeness with his or her target.  This eventually pushes the other member into an outsider role.  The predator may become physically intimate with the target thus achieving his or her ultimate goal. There may be a reduction of the tension for the target member and surely for the predator but the original relationship can be damaged beyond repair. 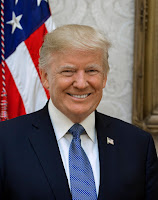 So, this is a long way around to get to the triangle I think I have fallen into.  What I am about to say may sound ridiculous.  I know it did to me as it began to emerge into my consciousness.  Each of us as citizens of the United States is in a relationship with our elected leader, currently Donald J. Trump.

In my lifetime, there have been 14 presidents beginning with Franklin Roosevelt.  I have had a good relationship with the first 13.  I didn't like or agree with all of them.  I felt closer to some than to others.  (Disclosure:  I was born in Kansas City MO into a line of Democrats stretching five generations in rural Missouri and further still in Virginia.  While many of those would probably be Republicans today, my Dad would certainly not be.  However, this essay is not about politics although it seems to be headed that way.  Just hold on.)

The current president is the problem, or at least my problem.  On every level--personal behavior, style, and policy--I simply cannot stand Trump.  Beginning with the night of his election, I experienced intense anxiety that I had never felt with other presidents.  As time passed after the election, my anxiety didn't decrease; it increased.  The more he talked in those elliptical sentences, blurting out nouns without verbs, the more anxious I became.  My response was predictable, I began to recruit third persons into my Trump triangle.

Some of these weren't persons at all.  I began reading theology to try to understand some of the more fundamental issues of life.  I especially was drawn to Reality, Grief and Hope by Walter Brueggemann.  I needed to deal with reality, grieve what had been lost and experience hope.  It helped...a bit.  I got more engaged in hobbies:  photography, writing, web design.  Not much help there.  I was trying to find something to which I could become emotionally engaged and thus calm my anxiety.  It worked as long as I was actively engaged in those activities, but the impact quickly waned.

Next, I began to spend a lot of time talking about Trump with my wife and other like-minded people.  We would share outrage after outrage.  It felt good to let it all out with another person who shared my feelings.  This strengthened my emotional bonds with them.  My emotional space grew more settled.  The acceptance of those with whom I shared my feelings reduced the Trump-induced anxiety.  This is a classic triangulation.  I was bonding with a third person and reducing tension while doing nothing to deal with whatever was causing the disruption.  If I kept on this way without dealing with the real problem, there would be no end to this.

Then I turned to the national media to understand better what was happening.  What I now think happened then was a surprise.  I will pick up there in the next blog.