A crisis, an opportunity.

"You never want a serious crisis to go to waste. And what I mean by that [is] it's an opportunity to do things that you think you could not before."  Rahm Emanuel  November 19, 2008

Emanuel said this as the Obama administration was preparing to take over the national government.    During the growing COVID-19 crisis, I think it has a particular relevance although I would restate the opportunity.  It is not that we can do things we should have done but for which we have been unable to build political support.  Rather this is an opportunity to reconnect with values that have become substantially less salient to our national life. 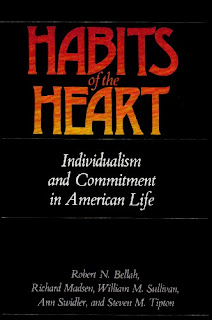 In 1985 Robert Bellah and a group of fellow sociologists published a study of the American character entitled "Habits of the Heart:  Individualism and Commitment in American Life."


"The title is from Alexis de Tocqueville who, writing about us in “Democracy in America” from 1835 to 1839, discovered habits of the heart--he named family life, religious convictions and participation in local politics--as helping to form the unique American character.  They were habits that would help sustain free institutions, De Tocqueville said. But he also suggested that individualism , a word he was one of the earliest to use and long since a catchword for the American character, could prove dangerous, setting citizens apart from one another, making positive collective action difficult if not impossible, and therefore threatening those same free institutions."  Charles Champlin Los Angeles Times, May 19, 1985

I read it shortly after publication and found it insightful.  It helped me--as a college administrator--understand the society for which we were preparing students.  My takeaway was this:  There were two principles at work in the American character:  communitarian and individual.  Our past could be read as the dynamic interplay between these two:  the urge to be a strong individual and the urge to be part of a community.  Bellah and his fellow authors expressed a concern that the creative balance between these two had been shifting.  Since the late 1940s individualism had been gaining strength and communitarian values were fading.  If this trend continued, the American character and society could be damaged in significant ways.

More than 30 years later, that concern has become urgent.  I believe that the COVID-19 pandemic can be an opportunity for America to rediscover its deeply rooted communitarian values which have been overshadowed by individualism.  Perhaps a rebalancing is possible.

The pandemic is and will be a challenging and intrusive experience for all Americans.  It may well be the marker for the rising generation much as 9/11 was for the Millenials.   The pandemic is forcing many but not all Americans to confront the reality that short term optimization of one's economic and social assets may lead to a sub-optimization of the economic and social assets of the larger community.  It would be nice, I suppose, if the single-minded pursuit of my own self-interest would somehow result in the improvement of the conditions of everyone.  Even Adam Smith's "invisible hand," required a society where the common good was clearly in mind for all.  It didn't take some special focus on the common good because that was assumed.  All that worked pretty well in more rural-based, face to face societies.  That focus began to break down with industrialization and urbanization.

While we could discuss which is the better--individualism or commitment to community--we would never come to conclude that one is better than the other, or a least we shouldn't.  We need both, not one at the expense of the other.  Ours is not a choice between a totalitarian communism or the objectivism of Ayn Rand.  We need a slider variable that will move toward individualism or toward communitarianism based on the circumstances and challenges.  The creative tension between these two fosters the vitality and creativity of a social group.  There is no absolute "best" state.  The optimum moves between but never to the two extremes.  Bellah et. al. were concerned that the movement toward individualism would be so drastic that the balance would be permanently damaged. 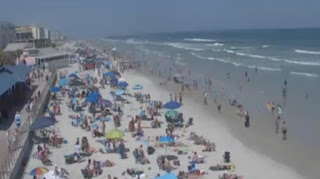 What we are all experiencing now is the dysfunction of extreme individualism that sees no problem with compromising the health of others as long as people can do what they want to do.  "I deserve a spring break so I am going to the beach and the bars."  "I always get together with this group of friends at a restaurant.  Why should I change my plans?"  "I am willing to run the risk of getting the virus.  Let other people worry about themselves; I'll worry about me."  "The virus has not come to my neighborhood.  Why should I change my behavior?"

Some are realizing now and soon everyone will that what I do impacts not only my health but also that of others, especially those whose age and/or underlying conditions place them at increased risk of negative outcomes from an infection.  We all have the chance to experience not our equality with others but our solidarity with them.  We have the opportunity to experience a conversion, a change of heart.  I don't mean this in any political or economic sense.  I don't even mean this in a religious sense.  We have the opportunity to experience an always present but often hidden reality.  We, all of us, are in this together.  Not just this pandemic but life.

We are called to act out of this change of heart in ways that most of us have never experienced.  Because this pandemic will spread through the country touching every state and locality, we all can experience what it means to be a community, with each of us doing what we can to help others, especially those who are often invisible.  I harbor no illusions that this spells the death of individualism.  That would be disastrous.  Maybe, just maybe, we can recalibrate our slider and move back toward those communitarian values that have always been an essential part of what makes us America. 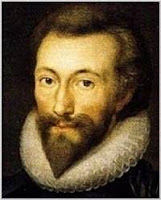 Humanity has been at this point often in its history.  When the poet and priest, John Dunn, lay seriously ill with spotted fever during an epidemic in 1624,  he wrote a book of prose reflections entitled, "Devotions Upon Emergent Occasions..." where his most famous lines--ironically prose not poetry--appear.


"No man is an island, entire of itself; every man is a piece of the continent, a part of the main. If a clod be washed away by the sea, Europe is the less, as well as if a promontory were, as well as if a manor of thy friend's or of thine own were: any man's death diminishes me, because I am involved in mankind, and therefore never send to know for whom the bell tolls; it tolls for thee."

We are likely to hear many bells tolling over the next months.  If we can take Dunn's sentiment to heart and act on it, perhaps there will be fewer, and we will be less diminished.