The time has come, the Walrus said, to talk of many things...like leadership

Indeed, the time has come to talk of many things.  In Alice in Wonderland, Tweedledee and Tweedledum recite The Walrus and the Carpenter to Alice.  The Walrus and the Carpenter are strolling on the beach and find themselves at an oyster bed.  They decide to trick the young oysters in going for a walk along the beach with them, a walk that ends with the oysters becoming dinner for the two.  Midway through their walk, the Walrus says 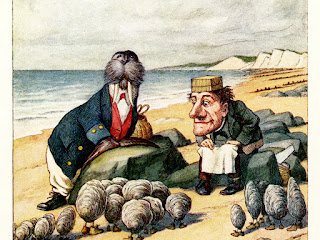 The time has come,' the Walrus said,

To talk of many things:

Of shoes — and ships — and sealing-wax —

Of cabbages — and kings —

And why the sea is boiling hot —

And whether pigs have wings.'

I am not sure what that list means but it did serve to distract the young oysters so they didn't realize what was happening to them.  An old oyster let the Walrus know that he was having none of this but the young oysters fell for it.   Let us not be distracted by nonsense in our national political life.  This is the time to talk about leadership because our challenges with COVID-19 highlight our nation's need for leadership.

As the world, our country and my state deal with a pandemic, the elected leader of the United States presents himself in daily briefings as a man unmoored from the standards that should guide the public behavior and statements of a leader, especially in a time of crisis and threat.  First, he says he has absolute and complete authority to tell the states, and by extension, everyone in the country what to do.  Then within days, he declares he is not responsible for anything.  He makes wild statements about improbable and even dangerous cures in a way he has honed over the years so that he takes no responsibility for the statements.  His speech is filled with "people say." "I've heard some people say." "Some people think." "Maybe it's true, maybe not.  We'll see."  He avoids taking a clear position so he can avoid any responsibility.  Or even more unsettling, he will contradict himself and then claim he never said what everyone heard and saw him say.  It always provides him with deniability if things turn out bad.  He can also claim he knew it before anyone else if it turns out well.  He seems obsessed with success and "winning" or at least with the appearance of success and winning.

Early in his career, he made himself into a celebrity by stimulating coverage on Page Six of the New York Post, basically a gossip page.  He did that by making outrageous statements about himself and others, statements he knew would be repeated in print regardless of their truth.  He even impersonated a media consultant to himself who would contact reporters and talk about "The Donald" in the third person.  The reporters knew who it was but repeated what he said anyway because it made such good gossip page reading.

He graduated from Page Six when he was cast in the lead role of The Apprentice and later The Celebrity Apprentice.  He went from a Manhattan-based notoriety to a national one as a leading CEO and business leader, not in reality but in a reality TV show.  Once he found Twitter, he was off and running.  He didn't change his tactics but they were amplified beyond anyone's imagination.  And now he is confronting a crisis.  And this crisis is not of his own making.  It is not a public relations creation to build his image or expand his reach.  It certainly gathers eyeballs but these eyeballs are looking for leadership, not entertainment.  What we now see is a man who has no idea of what a leader is or does other than WIN.

It is not his fault.  There are plenty of people who ascend to leadership positions without much of an idea about what leadership is or how to do it.  "I'm on top.  I have the supreme authority in this company, organization or country.  What I say, goes."  And that approach often works because people have gotten very good at letting leaders think they're in charge.  When a crisis arises, things can change quickly and radically.

What a leader needs to do is get people to do what the leader wants voluntarily, not because someone told them to but because they genuinely want to do it.  If a leader wants a lasting and significant change in behavior, people need to do it themselves.  Leadership is the process of influencing people's behavior while fully respecting their freedom.  Let's take a look at this in more detail.

First, leadership is a process, not a one-time event.  Effective leaders can often seem repetitive.  They realize that not everyone hears the message the first time and some who do forget it in the turbulence of everyday lives.  Key themes and actions need to be said often and repeated in different settings.  That consistency can often be boring and a challenge to leaders with short attention spans or a need for immediate results.  Sometimes a crisis makes it feel like leadership needs to be immediate.  If we feel threatened we are more likely to want someone to take charge and tells us what to do.  In a crisis, Americans typically increase their support of whoever is President.  This crisis bump can be squandered if the actions and decisions of the leader are not seen as effective and in the common interest.

Second, leadership is a process of influencing, not command/obedience.  Effective leadership seeks not just short term compliance but a lasting change in behavior and that lasting change in behavior is in the hands of followers, not the leader.  We don't need leadership if everything is staying the same.  Most of us most of the time follow a set of rules about what to do.  If A happens, we do B.  Everyone does B and we have always been doing B.  And B works.  It is the appropriate response.  Sometimes, it happens that B doesn't work.  We may try it over and over again but it just doesn't work.  Now what?  We have to change but how, when, and why?  This is where leadership comes in.  If everything is working out just fine, management works quite well.  But adapting to change requires leadership.  This is especially true when the challenge is clear to leadership but it may be murky for the rest of us.

Third, effective leadership fully respects the freedom of followers.  In other words, leadership is not about coercion.  Sometimes coercion is needed because of the risk or speed of a threat.  But we need to clarify that it is not leadership even though the leader may be the one coercing.  There is a World War II maxim, "Nobody's smarter than 100 GI's."  A commander could issue orders and depending on the situation the troops would comply.  But if they didn't trust the commander or found the order not in their best interest, eventually, they would figure a way around the order.  They would often go to extreme lengths to let the commander think they were complying.  In Vietnam, infantry patrols would go out from fortified positions.  It was not unusual for them to stop when they got out of the eyesight of the commanders and decide whether they were going out on patrol or not.  It was called sandbagging and eventually led to outright mutiny or combat refusal.

But what exactly do leaders do?  And how does power figure into all this?  We will get into that in the next episode.