The time has come, the walrus said, to talk of many things...like leadership and power 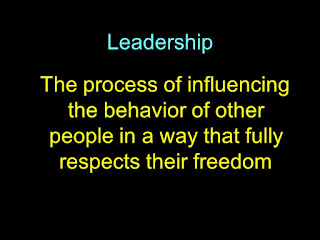 In the previous blog, I wrote about our current need for leadership on all levels but especially at the federal.  I also defined leadership as the process of influencing others while fully respecting their freedom.  While crisis situations can call for quick and decisive decisions, long term change relies on influence so that followers engage in the desired actions because they want to and not because they are ordered to do so.  In this post, I will discuss "power" and its role in leadership as I have defined it. 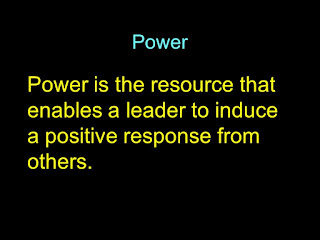 At first glance, power seems incompatible with respecting the freedom and autonomy of followers.  Often our experience with those who hold power is they use it to compel obedience.  Power seems to inevitably lead to a command and control approach to leadership.  That probably says more about the leaders we have experienced rather than the nature of leadership.  Power is one of those words that have multiple meanings and uses.  It comes from the Latin" posse" which means "to be able."  Power is the energy that enables someone to exert leadership.  It is the engine of leadership. 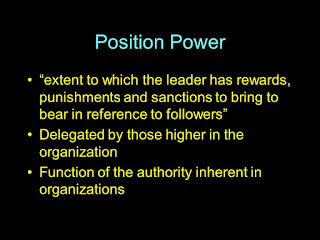 If leadership is the attempt to influence others, then power is the leader's potential for leadership.  A  leader has assets to use in leadership.  These assets fall into two categories:  positional power and personal power.  Another word that is handy here is "base."  Someone seeking to influence others has two power bases:  positional and personal.    Positional power comes from one's role in an organization.  For example, if I am a Director of Marketing, I have authority delegated to that position.  Also, I have power based on the relative importance and status of that function.  If I report to the CEO, I have more clout than if I report to a Vice President.  These are ex officio powers that an organization, group, or country grants to those who hold positions independent of the abilities and talents of the incumbent.  We can assume that the best people are selected for every job and that the talents match the authority of the position.  However, we have all had enough experience to realize that this is not always the case.  This same analysis applies to national and local governments as well.  Election to an office confers power to the incumbent quite apart from that person's actual talents and experience.  We hope for the best but are often disappointed.

Positional power is a function of the authority inherent in organizations and their governing structures.  Sometimes this power is limited and at other times quite expansive.  It all depends on the level and importance of the position and urgency of any threat.  In a democratic society, no position has absolute and unlimited power.   Laws, social norms, unions and associations, organizational culture and values, professionalization, and a general distrust of authority limit the positional power of leaders. 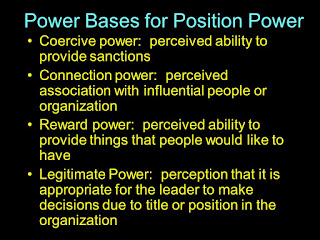 There are four positional power bases.  Coercive power is the perceived ability to force people to act in certain ways.  This is the rawest form of power.  It is the power of a dictator in a well established dictatorial system but it exists in all types of organizations.  An order from your boss with the implied threat that you will be fired if you do not obey relies on coercive power.  If you believe that the threat will be carried out, your compliance is being coerced.
Connection power is the perceived association with influential people or organizations.  If I have a connection with powerful people in the organization, I carry some of their positional authority even if I do not formally do so.  It was well known that there were several fiefdoms in the Ford Motor Company during the reign of Henry Ford II as chairman and CEO.  Key Vice Presidents had shadow organizations of loyal operatives throughout the company.  These operatives had power over others based on their relationship with their respective vice president even outside their "home" organization.  Their power was a function of the power of their sponsoring vice president.
Reward power is the perceived ability to provide things people would like or need to have.  These include salary, bonuses, titles, plum assignments, office location, reserved parking, expense accounts.  The list is endless.  If you control the allocation of these resources, you have enhanced power to influence others by rewarding the behavior you desire and withholding resources to punish behavior you do not want.  Finally,  legitimate power is based on the perception that it is appropriate for a leader to make decisions due to a title or position in the organization.  If you are the president of an organization, the members will generally accept decisions because you are the president, independent of any other factor. 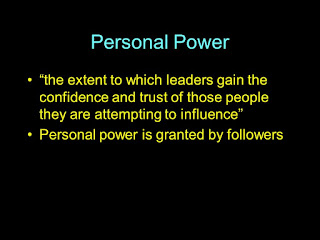 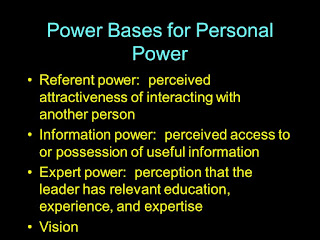 Referent power is the perceived attractiveness of interacting with another person.  This is obviously a highly subjective power base because it relies on personal preference.  I may find someone very attractive and would enjoy spending time with him or her.  However, another person might have exactly the opposite reaction.  He or she would have more power to influence me than a person who just didn't like him or her.  There is no particular rhyme or reason to this.  It is just human preference.  Social psychologists study attractiveness a lot.  While there are no complete answers to this complex question, two factors appear to be key:  physical attractiveness and similarity.  The first has some gender differences (men can be tall but not women; men can be older but not women) but someone who is not physically attractive has less referent power.  Followers appear to be more open to leadership from people with whom they can identify in some way:  background, history, religion, geographic region, status, etc.  Referent power can be important to a leader but it generally cannot be increased or decreased as long as honesty and openness are valued.  What leaders can do, however, is to share their stories.  Political leaders are typically very adept at this kind of self-disclosure.
Information power is the perceived access to or possession of useful information.  This personal power base has become extremely important since the rise of the internet.  While the amount of data has increased beyond measure, information has become more elusive.  Raw data becomes information when meaning and significance become attached.  "Actionable" is the term du jour.  A person who has information who can present it in ways that everyone can understand has enhanced his or her ability to influence people.  Unfortunately, the amplification of the internet works as well for false information as for true.  Concocted conspiracy theories work about as well as well referenced and verified reports.  People have realized that appearing to have information works as well as actually having it.  A 2018 study found that only 25% of U.S. adults could correctly distinguish factual statements from personal opinion statements.  Further, the study found that political affiliation had an impact on the evaluation of politically charged statements.  In another study, only 9% of 15-year-olds could correctly distinguish between facts and opinions.  This wholesale confusion of facts and opinion has eroded this personal power base.  Your partisans agree with whatever you say which might make you feel good but actually impairs your ability to influence other people.
Expert power is the perception that the leader has relevant education, experience, and expertise.  In the cacophony of information, we look for experts.  We want to hear from people who have demonstrated expertise in the area of concern.  Or more precisely, we used to want that.  Expertise has become linked with elitism and often is rejected out of hand.  We are often left with dueling experts who rail at us with more opinions than facts.  This erodes our trust in each other under the guise of valuing ordinary people and common sense.  In my lifetime I have experienced two presidential elections in which the obviously more qualified candidate lost the election to relatively inexperienced newcomers:  George H. W. Bush and Hilary Clinton.
A leader who has a clear vision of the future and can articulate it effectively can use this as a personal power base.  This power base offers hope of personal power beyond referent power.  When information power and expert power bases have become weakened, a person who has an understanding of what is going on and has a clear view of the next steps toward a future that will be better has the opportunity to exert influence on people's behavior.  Bernie Sanders and Elizabeth Warren exemplify this.  Based on a diagnosis of the current social and economic circumstances, they articulated a future that would address these issues.
Personal power is a function of the character, intellect, and presentation of a leader, independent of his or her role in an organization.  Of course, the most effective leaders will combine both a leadership role in an organization and highly cultivated personal power bases.  But any individual can develop his or her power bases and thus his or her capacity for leadership.  In fact, leadership is often exercised independently of the organizational position of a person.  Members of a group other than the formal leader can use their referent, information, expert, and/or vision power bases to influence the behavior of others in the group.  The highest performing groups are typically those whose members are all exercising leadership and not dependent on the formal leader alone.  The most important task of a formal leader is to nurture and sustain the leadership capacity of every group member, to create a culture of leadership.  Uncritical loyalty to the formal leader is incompatible with this approach to leadership. 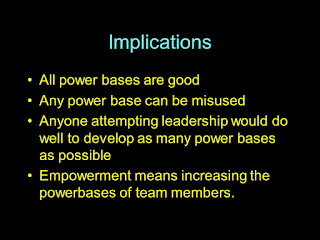 An effective leader cultivates and uses as many power bases as possible.  Given the challenges that formal leaders face today with the decline in public trust in institutions and authority,  smart leaders will work on his or her personal power bases.  So which is better:  position authority or personal authority?  Which power bases are better?  Since most agree that leadership is situational, it all depends.  But the most effective leaders develop their own personal power bases so they are not completely dependent on positional power.  The more leader depends on positional authority, the more problematic.  This is especially true for coercive and reward behavior.  The more one relies on either of these, the more one must resort to them.  As the legitimacy of coercion or the lack of rewards become evident, the ability to influence followers decays.  Long term compliance is more reliably built on personal power bases.
This has been the second of three blogs about leadership.  The first defined leadership and this one discussed power and its role in leadership.  My third and final blog on leadership will present lessons about leadership from my own experiences of exercising leadership and teaching a graduate course in leadership.
Posted by Bill Pickett at 1:43 PM