Why" Black Lives Matter" matters to me. 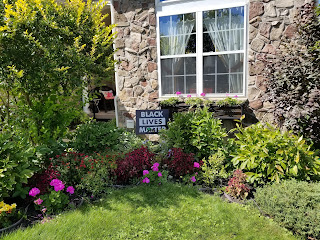 Black Lives Matter began in July 2013 as a hashtag #blacklivesmatter in response to the acquittal of George Zimmerman in the shooting death of Trayvon Martin in 2011.  It gained national attention in 2014 with the deaths of Michael Brown in Ferguson, Missouri and Eric Garner in New York City.  While there is a national organization of sorts, BLM is best described as a “decentralized network of activists with no formal hierarchy.” (Wikipedia) For me and many others, however, the phrase is a simple expression of a powerful truth:  All human lives matter.  When I see or hear these words, I think of the Old Testament prophets speaking out against injustice.  I think of the Psalms crying out for mercy and justice.

How long, O LORD? Will you forget me forever?
How long will you hide your face from me?
How long must I bear grief in my soul,
have sorrow in my heart all day long?
How long shall my enemy prevail over me?  Psalm 13

Since I believe this, I am forced to speak out when there is clear evidence that some lives do not matter.

How we treat our neighbor is not a zero-sum game.  It is a false proposition that we can only value some lives at the expense of other lives.  When I hear people respond to BLM by asking about “blue lives,” or “white lives,” or “unborn lives,” I think, “That’s exactly right.”  All lives matter and so too should black lives, not instead of other lives but just like other lives.  Black lives should matter just as much as white lives but, in fact, they do not.

Like many white people I was disposed to view the disturbing string of deaths of black citizens as isolated incidents each of which seemed to have extenuating circumstances.  In other words I was disposed toward the status quo.  All that changed with the homicide of George Floyd.  The video of an officer sworn to protect and serve casually killing a citizen who posed no threat to himself, the officer or bystanders lives vividly and disturbingly in my memory.  When the EMT crew arrived, they dragged Floyd’s lifeless body as though he was roadkill.  They acted with the assurance and arrogance of impunity.  Because of a 17-year-old girl and her cell phone, the entire world has been able to witness this tragic interaction between police and citizen in a country which most of the world sees as a beacon of liberty.  I was horrified at what I saw, not because it has not happened before but because this time it was blatant, out in the open, and undeniable.  I do not want this done in my name, not ever.

I also realized that this had happened too often in the past several years to view it as an isolated incident; there is a systemic problem that goes well beyond individual police officers.  I want to believe that most police officers would condemn this and other instances of excessive force but this abuse of power may be more common than we know.  Unfortunately, the lack of comprehensive and transparent information on police use of force makes it difficult to know for sure.  We do know that as the interaction between militarized police and demonstrators increased, the acts of violence also increased.  Things got worse, not better.

The fact that George Floyd was a black man has underscored the racial issues involved in policing.  As a white man, I have never experienced what it is like to view police as dangerous protagonists.  However, I have no doubt that what my black friends say about their experience is valid and true.   I have never had to have “the talk” with my children but if I or they were black, it would be irresponsible not to.  This is a deeply sad situation.

All this matters to me because I try to live my life as a follower of Jesus Christ.  He accepted and welcomed all, no matter their circumstances.  He was particularly concerned about those on the margins, the “nobodies,” the excluded, the different.  His Kingdom was for all and still is.  His earliest followers lived their lives as expressions of that fundamental equality.  No one was to count more than any other.  All lives mattered to him but he gave special attention to those whose lives the “powers that be” devalued.  So, I believe, must we.